Calling for the immediate release of Fr. Stan Swamy SJ 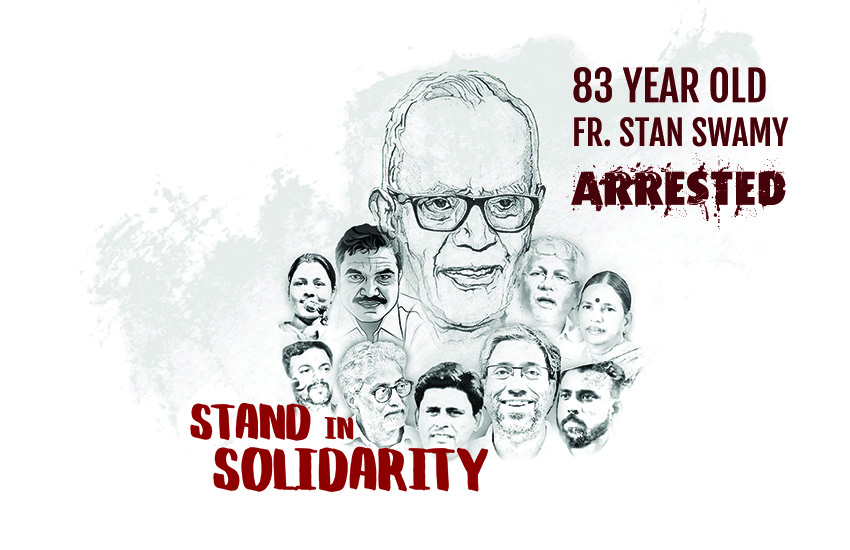 The undersigned, several organisations linked to the Society of Jesus, would like to express our grave ongoing concerns regarding the 83-year-old Indian Jesuit priest and human rights defender, Fr. Stan Swamy SJ, who was taken into custody by India’s National Investigation Agency (NIA) on 8 October 2020.

Fr. Stan Swamy has worked for four decades for the rights of indigenous peoples (Adivasis) in the states of Jharkhand, Chattisgarh and Madhya Pradesh in India. He was Director of the Indian Social Institute Bengaluru, from 1974 to 1991. From 1991 to 2000, he served as Director of the Jharkhandi Organization for Human Rights, a Jesuit Social Centre in Chaibasa, – which works among the ‘Ho’ tribes. In 2000, he moved to Ranchi and in 2006, he founded a new social Centre, known as Bagaicha, which continues to work for the rights of Adivasi people in central India through research studies, documentation, training and establishing solidarity with tribal movements. Among others, he founded the Persecuted Prisoners Solidarity Committee (PPSC), which documented, studied and published the fabricated cases filed against thousands of Adivasis languishing in jails. All of them were accused of links with Maoists, although they had opposed mainly the land grabbing by mining companies and other corporates.  Based on the findings, he filed a Public Interest Litigation in the Ranchi High Court demanding speedy disposal of the cases. Today, Fr. Stan is unjustly accused of having the same links with Maoists as those Adivasi leaders.

In July and August 2020, Fr. Stan Swamy SJ was harassed, and interrogated multiple times for over 15 hours by the NIA about the Elgar Parishad event that preceded the violence between Dalits and Marathas at Bhima Koregaon near Pune on 31 December 2017. On 8 October 2020, NIA arrested Fr Swamy, falsely accusing him of having personal links with the banned Maoist extremist group, the Communist Party of India (CPI).

Disregard for Human Rights, Due Process, and Rule of Law

Fr. Stan Swamy is the oldest person to be accused of terrorism in India. He suffers from Parkinson’s disease and is at great risk of COVID-19 despite living in a separate cell from others. He is reliant on a straw and sipper-tumbler to be able to take in fluids independently. These were denied him initially and it took the authorities over a month and half to finally allow him access to these much needed utensils. Finally, the authorities granted Fr. Swamy those much-needed utensils having been without them one month and a half.

Fr. Swamy is the most recent of 16 people to have been detained in connection with the Elgar Parishad incident. Others include well-known human rights’ lawyers Arun Ferreira and Sudha Bharadwaj, and writers Vernon Gonsalvez and Varavara Rao – who is very sick and bedridden.

The NIA has accused Fr Swamy of involvement in the actions of the banned CPI at Elgar Parishad. Fr. Swamy has stated that he is being targeted because of his writings and work for Adivasis and on caste and land struggles. Late last month a special NIA court rejected Fr Swamy’s bail application, which had been filed on medical grounds, declaring that the octogenarian had been charged under the stringent Unlawful Activities (Prevention) Act and was therefore not allowed bail.

Advocate Sharif Shaikh, appearing on behalf of Fr Swamy, told the court that Fr. Stan must be granted bail on humanitarian grounds. Fr Swamy had undergone surgery just before his arrest and had fallen while he was in jail. The agency, however, opposed his release and said it had sufficient evidence to prove his involvement in the conspiracy.

UN Secretary General Antonio Guterres remarked in December 2018: “Disregard for human rights does great harm. When human rights defenders are threatened, the principles of the United Nations are under attack.”

Furthermore, the High Commissioner for Human Rights, Ms. Michelle Bachelet, has expressed her concern for human rights in India and  in her press release  of October 20, 2020 noted that:” most recently, the 83-year-old Catholic priest, Fr. Stan Swamy SJ, a veteran activist involved in the defense of the rights of marginalized groups, was arrested and remains in detention, despite his delicate state of health”.

On 10 December, International Human Rights Day, we urge the Indian government to safeguard Fr. Swamy’s health and wellbeing and demand his immediate release.

This site uses Akismet to reduce spam. Learn how your comment data is processed.